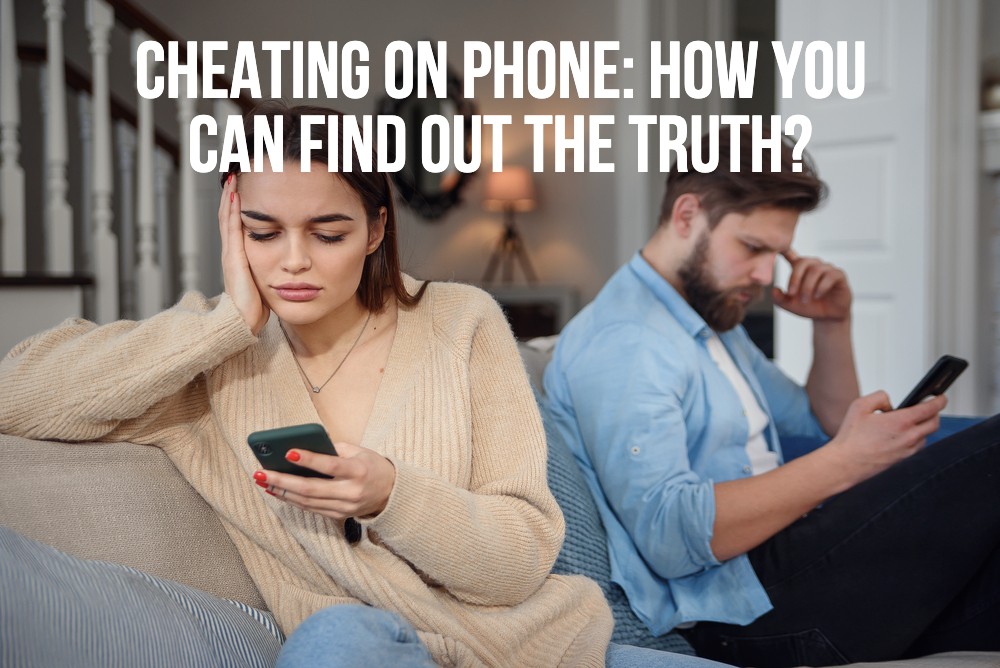 Cheating on Phone: How You Can Find Out the Truth

On a smartphone, you can find a lot of personal information, but, in some cases, there is way more that can be discovered. How many couples can positively say they feel confident looking through each other’s phones?

Since cheating on the phone can be a problem for quite a lot of couples, this article is going to focus on how to catch a spouse cheating on a cellphone. We prepared this guide based on surveys and several discussions with psychologists and hope to provide you with useful information on how to catch a cheating husband on his phone. Obviously, though, all the information contained in the article can be used to discovering a cheating girlfriend too.

Cheating on the Phone: Why Do People Cheat?

According to PsychCentral, society is getting used to cheating, almost like it’s something to be expected after a few years of relationship. However, according to different studies, cheating isn’t as common as we believe.

A 2017 study showed that cheating mostly happens between heterosexual young adults around the age of 20. In any year of a relationship, the chance of actually getting cheated on is around 5%, which is pretty low if you think about it. If you take the whole duration of the relationship, we can see that this percentage rises to 25%, meaning it’s higher but still not as much as the average person is expecting.

Even though these stats are somewhat reassuring, let’s now see why it still happens. What are the most common reasons for people deciding to cheat rather than break up?

A successful relationship needs to be based on communication. Failing to do so will eventually lead to the creation of several problems that will get more and more difficult to solve over time.

The main risk is that this might lead some people to seek attention elsewhere, meaning a boyfriend might go to somebody else who is more willing to listen to his stories and his emotions.

If the sex life of a couple is close to non-existent, one side might start feeling undesired and rejected. This is the reason why a lot of people decide to turn to cheating and find somebody that will make them feel desired again.

Smartphones make it extremely easy to find additional sex partners, which is why knowing how to catch a cheating husband on his cell phone can be useful in finding out what’s really going on.

Sometimes, a person can feel like they’re the ones making all the efforts in the relationship, while their partners stand there and do nothing to make the other feel appreciated. This will lead to them feeling like the relationship is one-sided until eventually, the person will turn to cheating. Not feeling appreciated is one of the main factors that make people decide to find another person and share with them what is lacking with their partners.

A lot of people confessed they cheated on their partners under the influence of alcohol or because of certain occasional situations. This mostly happens among young adults, but, even though they probably wouldn’t have done it if they were sober, this might lead to repercussions that involve further cheating. This means their partners might feel entitled to cheat as an act of revenge, creating a cycle of hurt, which is very difficult to end.

These were some of the main causes that might lead to cheating, but if you want to read additional information on the topic, you might find this article from Psychology Today very interesting.

Let’s now share some stories of how people caught their significant others cheating on the phone, while also giving some tips on the signs you should be looking for if you suspect your partner is being unfaithful.

Spy on a cheating spouse cell phone with mSpy

The mSpy app is definitely the best way to monitor someone’s phone or tablet, and it’s going to allow you to track your partner’s activities in order to discover if they are unfaithful.

Here some of its main features:

These were only the main characteristics, but there’s also a lot more that mSpy offers its users. This app offers two subscription plans, a standard one for as little as $1 per day which features the basic characteristics, and a premium one that comes with all the main features in order to fully monitor the activities on your partner’s phone.

One of the many testimonies of people finding is that of a girl who easily installed mSpy on her boyfriend’s phone. The process took less than 15 minutes, and then she was able to monitor his activities for a few days before she finally found the proof she was looking for. The revelation came through a WhatsApp conversation between her boyfriend and a girl she didn’t personally know.

Another girl tells how her boyfriend discovered she was seeing another guy using mSpy. She emphasizes the fact she never even noticed he had managed to install the app on her phone.

The trash folder can reveal a lot of information a cheater could be trying to hide. Not everybody is careful enough to delete data from the trash folder regularly, and that is why you should keep an eye on it to discover is there’s something going on. Email, photos, messages… This is what you should take a look at when you suspect your partner is cheating.

And that is exactly what one of our readers did when he was suspecting his wife was being unfaithful. Looking through the deleted emails in her phone, he found a couple of messages from a colleague that didn’t sound quite right. He waited a couple of weeks before making any accusations, and, once he gathered enough proof, he finally confronted his spouse and found out he was right to doubt her.

The contrary happened to a man who was caught cheating by his girlfriend because he forgot to empty his trash folder. He also stated he had no idea how long she’d been checking his phone.

Find My Friends and Find My iPhone are apps that are installed by default on any iOS device and they offer a pretty good and cheap way to track a phone’s location. All you need to do if your spouse has an iPhone is getting a hold of it and enabling the location sharing function. Then you just need to click on Find My iPhone or on Find My Friends and you’ll be able to check his location at any time.

This is an effective way to keep track of your boyfriend’s whereabouts and, most importantly, find out if he’s lying to you when he says he’s at work.

Many people find this feature useful, more specifically, we have the story of a reader who managed to discover her husband’s infidelity through Find My Friends. He’d been telling her he was working extra hours for weeks and, when she finally decided to check if that was true, she, unfortunately, discovered he was visiting another town during that time.

Another man tells us he was busted because of Find My Friends too. When asked how he didn’t notice he was being tracked, he answered he even forgot his phone had that app because he rarely noticed its existence and always dismissed it as something that didn’t interest him.

One of the most common times of the day people cheat is during the night. For this reason, being able to use an app to record the night sounds can tell you a lot about your partner’s doings and whereabouts. There are hundreds of free apps available for iOS and Android who work as sound recorders and can also work in standby mode.

This is exactly how a reader found out her husband was cheating on her. After weeks of suspecting his infidelity, she managed to install a recording app on his phone, turns out she was able to hear everything he was saying to his lover during a phone call.

What is the best app to catch a cheating spouse?

mSpy is hands down the best app to get if you are unsure of your partner’s fidelity. This app offers dozens of features to help you keep track of the phone’s activities and it’s also fast to install on the device.

How can I see my boyfriend’s text messages without him knowing for free?

The best way to read text messages for free is to get a hold of your boyfriend’s phone and scroll through it. Unfortunately, many tracking apps claim they can intercept text messages for free, but they are all scams that will waste your money and probably cause you to download malware on your phone.

How can you tell if your partner has cheated?

In order to know for sure, you need to download an app like mSpy that allows you to monitor your partner’s phone to check what they’re up to. In addition, you could download a recording app to find out if he’s having an affair through his conversation.

Another easy way could be regularly going through his trash folders in hopes of finding some deleted emails or pictures that can point towards cheating.

How do I track a cheating spouse?

Apps like mSpy or GPS tracking software are the best ways to track a phone. More specifically, apps like Find My Friends are valid solutions to track your spouse’s phone and GPS locations to find out where he’s going when he tells you he can’t be home for dinner.

Now that we covered the most common and the best ways to spy on a cheating spouse’s cell phone, we can conclude that using free apps is easy and cheap, however, they’re going to give you way less information when compared to tracking apps.

Checking the trash folder is also a valid option, however, the risk of not finding anything is increased if your spouse is very defensive of his or her phone and doesn’t allow you near it very often.

Ultimately, we can confirm that the safest and the most efficient way of tracking a phone to discover signs of cheating is using the mSpy app. Even though it comes for a monthly price, the features it offers will allow you to find out for sure if something shady is going on in your partner’s life.

How to Catch a Cheater: Everything You Need to Know

Cheating Husband: How to Tell If Your Husband Is Cheating on You and How to Bust Him

Facebook Secret Conversations Cheating: Signs of a Spouse Cheating on Facebook and Ways to Catch a Cheating Spouse